If there’s one thing everybody knows about gambling it’s that the house always wins. And while it is true that casinos always make a profit, there are a number of ways to cheat the system – some of which are actually perfectly legal.

Half a century ago, mathematician Edward Thorp published a groundbreaking book outlining how a player could use “card counting” to get an advantage in the game Blackjack by keeping track of the cards left in a deck. Ever since, casinos have been trying to eradicate card counting while card counters are getting increasingly skilled at not getting caught. So is it possible to outplay casinos today? And what will it be like in the future?

Winning Blackjack Hand. Wikipedia Commons
Casinos are businesses and operate by building in a margin – often referred to as the house edge. If you play roulette and bet on a single number you will be paid at odds of 35-1 when the true odds are 36-1 in Europe and 37-1 in the US. The fact that you are receiving less than the true odds is the house edge and explains why casinos make money in the long term. Of course, some people have to win, otherwise casinos would cease to exist.

Advantage players
What casinos don’t like are “advantage players” – people seeking to have an edge over the house. Sometimes this involves cheating and/or illegal activities ranging from past posting (making a bet after the time when no more bets are to be taken) to collaborating at the poker table and using a computer to help make decisions.

Card counting, however, is legal. In Blackjack, the aim of the player is to achieve a hand of cards whose points add up nearer to 21 than the dealer’s hand, but without exceeding 21. Many hands are played from the same deck of cards, so what happens in one hand will influence what happens in future hands. As an example, if a ten has been played from the pack then it cannot appear in the next hand. This is different from other games, such as roulette, where the outcome of one spin has no effect on the next spin.

Professor Thorp and his contribution to card counting.
Card counting is based on the fact that a large proportion of high cards (such as tens, jacks, queens and kings, which are all worth ten points) left in the unplayed deck statistically improves the player’s chances. This is because a player can decide not to draw a new card to a hand such as 16, but the casino is forced to, as it follows strict rules. If there are a high proportion of high cards left in the unplayed deck of cards, the dealer has more chance of busting (going over 21). This can be combined with “basic strategy” – developed from computer simulations of millions of blackjack hands – which tells the player the best action to take for each possible card combination.

Combining card counting and basic strategy can help a player convert the (long term) house edge from 2.7%, in favour of the casino, to about a 1% advantage to the player. Of course, once you have this advantage you can increase your bet.

To give a simple example, if you were playing basic strategy and were dealt a ten and a six, and the dealer had a three showing (one of the dealers cards is visible to the player), you would stand (not take another card) as you hope that the dealer would draw a ten and bust. If you were card counting, and you knew that more low cards had been played, you might decide to increase your stake at this point.

Evolving battle
Casinos have introduced a number of measures to deter card counting. These include spotting those doing it and simply banning them from playing, or even from entering the casino. Another approach is to increase the number of decks from one to (typically) six, or even eight. Some casinos also shuffle the cards after only about 75% have been played or shuffle them constantly using automatic shufflers.

You might wonder why casinos don’t simply withdraw blackjack. Well, it remains a popular game, and one that is still profitable. There are also many would-be card counters who are not actually that good at it, and they provide income to the casinos.

Many blackjack players have fought back against such measures, arguing that casinos should allow gamblers to use skill when playing the game. As a card counter operating on their own is relatively easy to spot (intense concentration, increasing bets and so on), a team of students from MIT showed it could successfully be done in teams. The idea is that somebody else counts the cards – they may not even be sitting at the table. When the count reaches an agreed value, they signal to another player, who joins the table to start betting. This is a lot more difficult to detect but casinos may stop players joining the game until after a shuffle to combat such a strategy.

Breaking Vegas: the true story of The MIT blackjack team.
Other players have used shuffle tracking, where blocks of cards are tracked so that you have some idea when they will appear. If you are given the option to cut the pack, you try and cut the pack near where you think the block of cards you are tracking is so that you can bet accordingly. A variant on this is to track aces as, if you know when one is likely to appear, you have a distinct advantage over the casino.

It’s been 50 years since Thorp’s book, and it is unlikely that the war of wills between blackjack players and casinos will end any time soon. Some of our work has investigated how artificial neural networks (simple models of the human brain) could help evolve blackjack strategies. This was done by playing thousands of blackjack hands and the computer learning what to do in any given situation, getting better each time. There is a lot of scope to see if automated computer programs could learn even more sophisticated strategies. 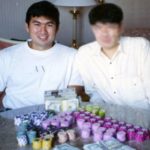 How A Team Of Students Beat The Casinos